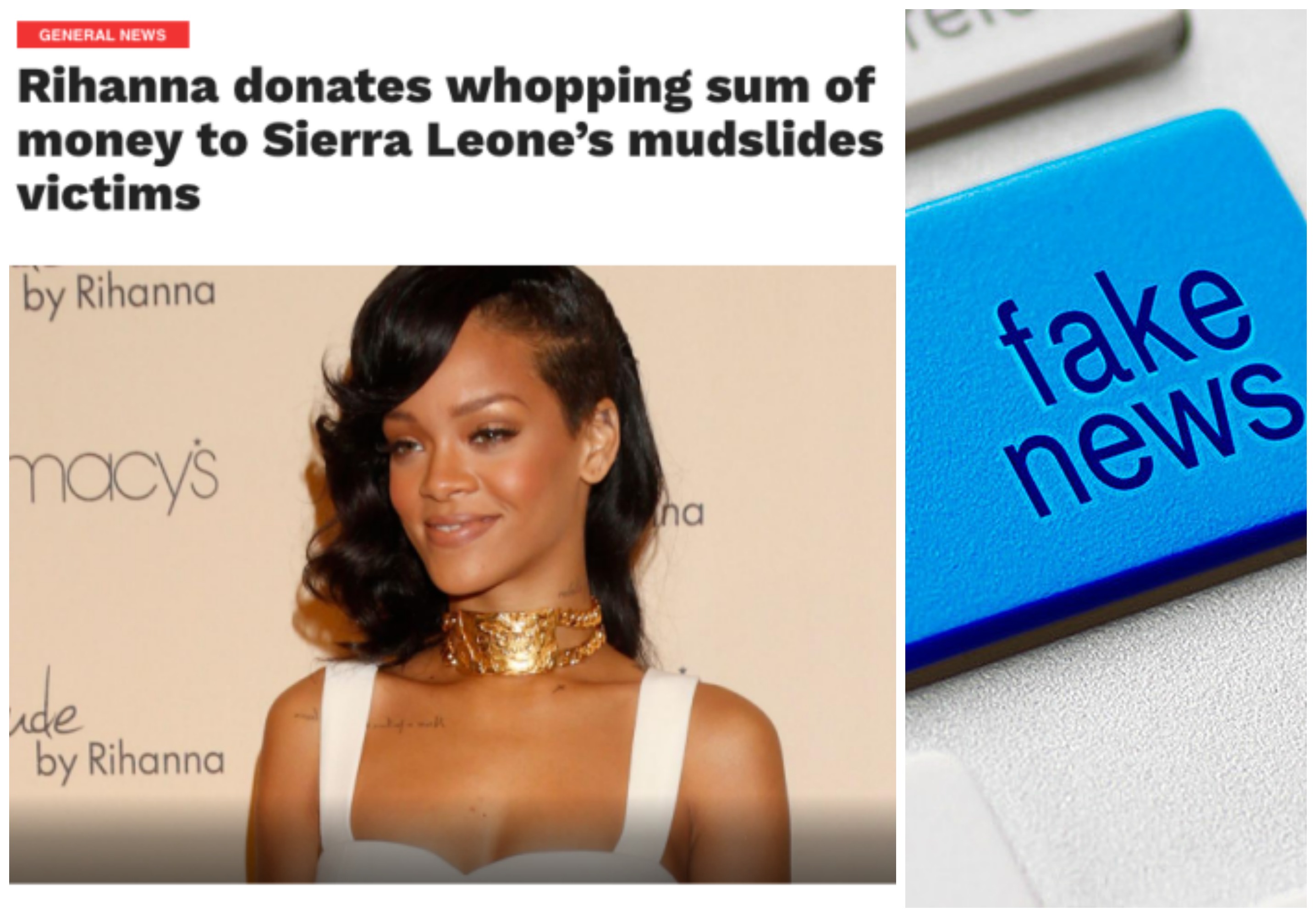 The former journalist in me hates to have to report about “fake news”, a  term that has become a political pejorative and assigned to very real, First-Amendment protected, credible news organizations as well as to the army of fraudulent, fabricated sites created for the mere purpose of circulating propaganda and false news stories.

However, we have to apologize for and update on reporting on this blog that Rihanna‘s charity, the Clara Lionel Foundation, donated $2M to help the victims of Sierra Leone, West Africa’s landslide last week.

The mudslide is considered one of Africa’s worst flooding-related disasters in recent history.

The false claims about Rihanna’s donation originally appeared on a website called Global News in an article called “Rihanna donates whopping sum of money to Sierra Leone’s mudslide victims“.  It was shared widely and also covered by the news site Barbados Today, though it had not received wide coverage in reputable national outlets.

Given the fact that the Sierra Leone landslide had gone relatively under reported generally, among these major news publications, we didn’t think too much about reporting on the donation and only did so after seeing it published by an online new outlet native to the pop singer’s birth nation, Barbados.

Unfortunately, it was a false article based on made up facts and quotes, apparently. The Barbados Today article has been taken down as has ours.

A representative of Rihanna’s foundation told Bellyitch, “like many around the world, we are devastated by the tragic mudslide in Sierra Leone. Yet, we have to address that the entirety of the story reported in Barbados Today and later re-posted on Global News is untrue and completely inaccurate.”

It is disappointing in several aspects, but especially because the “fake news” created some false hopes among victims that there was substantial relief coming their way; and that momentum was building so more would care to help.

Alas, that is not the case.

The article posted on the blog has been removed but the other organizations that are gathering supplies, and helping continue.

The latter part of the article still applies and therefore, we are reposting that here:

The death toll includes those killed in mudslides on the outskirts of the West Africa. The country’s president Dr. Ernest Bai Koroma sent out a global plea to all nations to help.

Nearby African leaders of other nations stepped up first.

Non African nations that sent supplies and support include Israel, which was the first country to send an envoy of supplies and Turkey.

As can be expected, expats from Sierra Leone the UK, France, Germany and the US have launched several efforts to help.

I’m aware of and can endorse the AC Global initiative, the Mama-Pikini Organization, and Act for Sierra Leone and urge any individual wanting to help to donate to one of these groups.

As a Catholic, I support the Catholic Relief Service, which is usually great about making sure the bulk of support go to victims and not to programmatic support like salaries and travel for staff.

Ideally, more attention will mean more help and help getting to the victims. I’m grateful to Rihanna because maybe more celebs will step up.

“First of all, it is the right thing to do. We have the ability, and with a relatively small effort, and relatively small budget, we can make a big difference,” Paul Hirschson, leader of Israel’s envoy of help said. “That is the first and foremost reason.”

The next stage of Israel’s assistance will be to provide antibiotics to deal with concerns of an outbreak of cholera, and hopefully by then, more countries will also offer tangible relief and help.