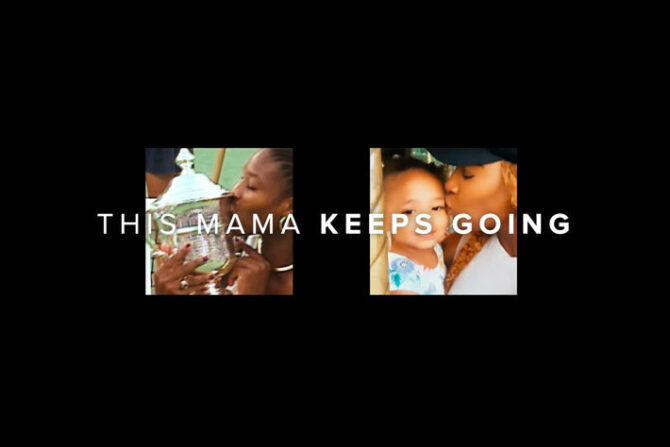 Twenty years ago, 23-Times Grand Slam Tennis Champ Serena Williams won her first US Open in 1999 and today longtime sponsor Chase Bank released a compelling ad on TV to commemorate that win as she continues on her post-motherhood journey to capture her 24th Title.

The last championship, she secured at the 2017 Australian Open while 7 weeks pregnant,

Thus, in a full-circle presentation, Chase brilliantly weaves the narratives of her athletic achievement and motherhood into the story of a singular life in the campaign video produced by Australian ad vet David Droga’s firm Droga5.

The advertisement is a continuation of a campaign the bank launched last year called “This Mama Keeps Going” and this time, a short film opens with a visual of a sonogram with background vocals. A reporter congratulating Williams.  The video continues with shots of never-before-seen very personal videos and photos from Williams’ pregnancy and in the voiceover, she shares her excitement and struggles.

Interspersed is footage of her daughter, Alexis Olympia Ohanian, who she welcomed on September 1, 2017 with hubby, Reddit co-founder Alexis Ohanian, and as the TV spot focuses in on Williams’ tough sojourn in recovery after a difficult delivery when she suffered from a pulmonary embolism. (Which immediately reminds us of her vocal advocacy  for expectant mothers, especially women of color, after birth in the US.),

She didn’t win in today’s US Open Finals though she battled and defeated a lot of excellent players, losing to the younger version of herself, a stellar Canadian upstart, 19-year old Bianca Andreescu, the battle continues.

Through scenes of breastfeeding, pumping and calming a fussy toddler, Williams speaks about the joy of watching a daughter succeed.

Only then does it become clear that her words are from a press conference after her very first Grand Slam win, 20 years ago at the U.S. Open in 1999.