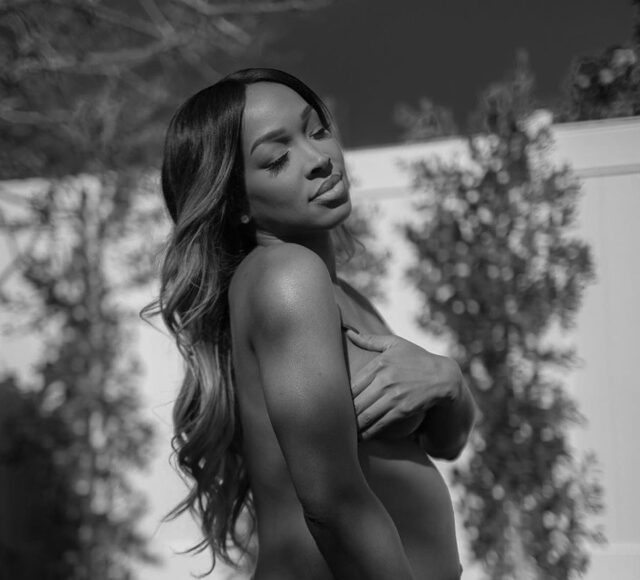 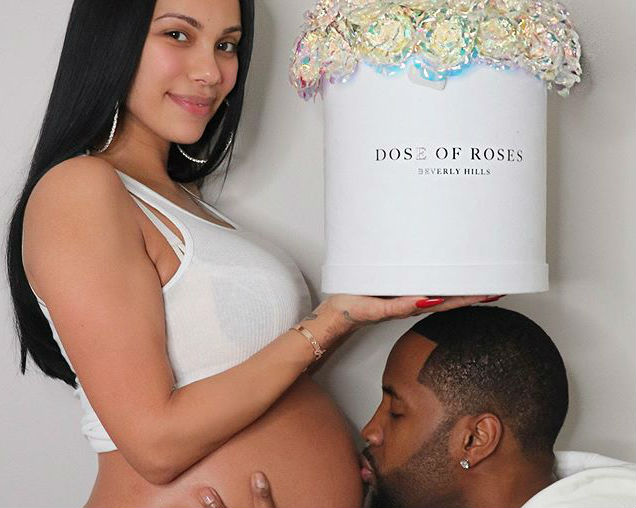 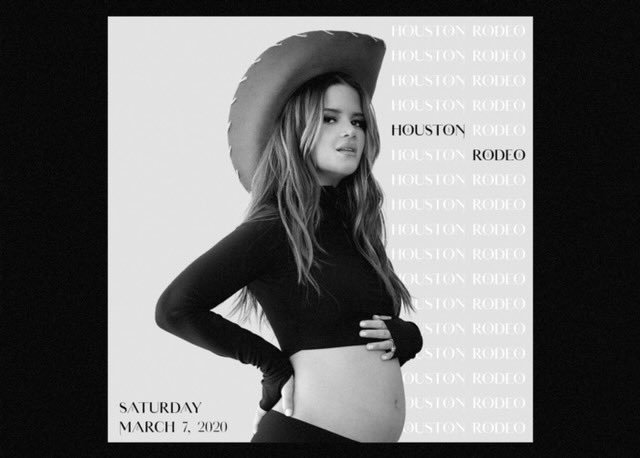 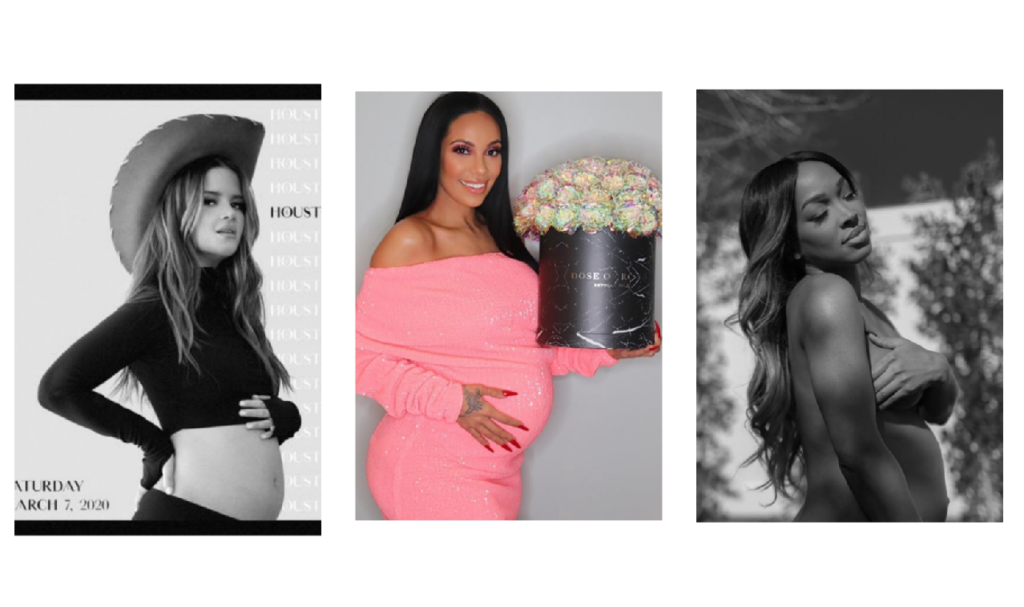 It’s been awhile since I stalked checked in with some of our fave pregnant celebs. 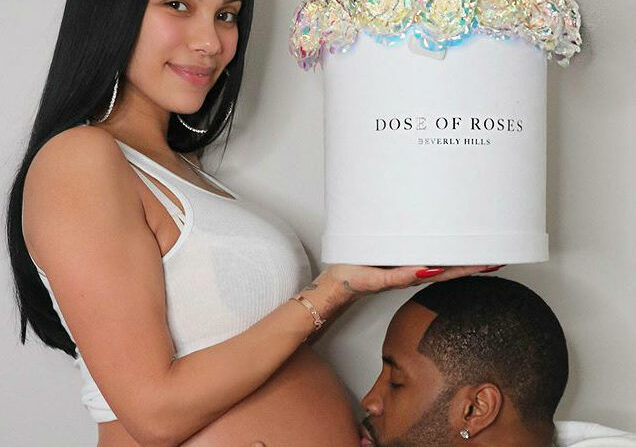 Love and Hip Hop‘s Erica Mena has been styling and profiling on Insta and recently revealed during a “gender reveal party” that she and hubby Safaree Samuels are havig a baby girl.

“God I can’t thank you enough,” Erica wrote in an Instagram post that featured footage from the big gender reveal party. “My husband and I are living a dream,” Mena told her fans. “Everything we’ve ever wanted has officially come true. 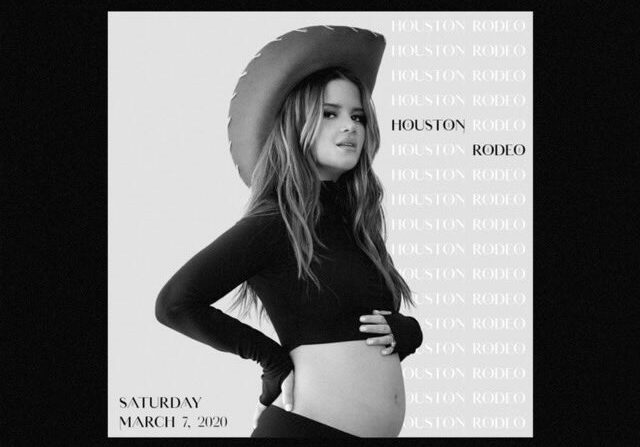 Meanwhile, country singer Maren Morris, who is expecting her first child — a baby boy with husband Ryan Hurd,  is cracking us up with her funny posts on Twitter.

Third Trimester Hormone Update: My nail lady said “your face doesn’t even look that fat” and I genuinely teared up I was so touched.

Serena Williams is having a very social week. A day after making her red carpet baby bump debut, the tennis champ attended the launch of the Burberry DK88 Bag hosted by Christopher Bailey at Burberry Soho on May 2, 2017 in New York City.

Whitney Port is finally coming from under the exhaustion spell of pregnancy. She posted a photo of herself looking happy and well…energetic on her Instagram account recently.

FINALLY feeling that ?? energy! How are all you pregnant ladies staying fit?! ?: @emboslice_

Her fellow MTV The Hills alum co-star Lauren Conrad has been laying low but was spotted  at designer Rebecca Minkoff’s Spring 2017 ‘See Now, Buy Now’ Fashion Show on February 4, 2017 earlier in her pregnancy.

And another MTV family alum, Heidi Pratt showed off her bump with her hubby Spencer Pratt this week. “Sunday Fun. The 3 of Us,” she captioned an Instagram photo of the growing family.

Meanwhile, Beyonce has been busy making news as well. She appeared at her mom Tina Knowles Lawson and step dad Richard Lawson‘s charity fundraiser to support the WACO Theater Center in California. The event called the Inaugural Wearable Art Gala raised $1M, according to a recent post  by Beyonce. It is reminiscent of the Met Ball, which also encourages attendees to wear artistic renditions of clothing or vice versa, wear art like clothes.

I am super proud of my beautiful mother for creating such an awesome event. Close to $1 million was raised for The WACO Theater Center to benefit young people through their mentorship programs and the arts. Mom, you inspire us all to be generous, selfless, positive, to have empathy, to love and to praise creativity in the world. It brought tears to my eyes to be a witness to what you and Richard have created together. WACO is a safe place truly Where Art Can Occur. I love you.

Meanwhile, Bey released the collector’s edition of her multi-award winning visual album, “Lemonade.” The box set will set you back $300 but it comes with behind the scenes photos, prints of Beyonce’s personal hand written notes drafted during the creation of the project and much more.

And just for kicks, Queen Bey blessed her fans and followers with another video of a game night date night she went on with her husband.

Last month, author Chimamanda Ngozi-Adichie revealed that she had kept her recent pregnancy private. “I just feel like we live in an age when women are supposed to perform pregnancy,” she told the Financial  Times. “We don’t expect fathers to perform fatherhood.”

And what did that noble move and statement spawn?

Yet another blistering op-Ed about the bump watch press.

In a new piece in Qz, titled “Modern obsession with pregnancy is just another attempt to control women’s bodies“, writer Phoebe Bronstein criticizes the world’s fascination with celebrity pregnancies.

As Renee Cramer writes in Pregnant With the Stars, her book about celebrity pregnancies, “The pregnant female body has gone from being an embarrassing reminder that women had sex and therefore private state of being to being considered public property for regulation and commercial property to be celebrated as sexy.” This obsession translates into a constant baby-bump watch. Now pop culture is dominated by absurd conversations about which celebrities do pregnancy best—Beyonce or Jessica Simpson? Christina Aguilera or Chrissy Teigan? Certainly not Kim Kardashian, whose pregnancy fashion received plenty of negative coverage.

At the root of these evaluations is an impulse to shame women who fail to perform pregnancy in a sufficiently glowing and feminine fashion. At the same time, such conversations frame pregnancy as a kind of style choice: the newest (or oldest) accessory.

Ok. Sure. Is it really that deep, Ms. Bronstein?

Aren’t you essentially shaming the press and blogs for writing on a topic you think shames women? It’s all shaming.

And isn’t the word “shame” (and  “[fill-in-the-blank] shaming”) being overused to the point they are becoming cliche and borderline meaningless?

Ok. I may be biased.

Saturday is the day we share international bump watch and highlight expecting celebrities from other nations that have a substantial film industry like Bollywood (Indian and Pakistan), Ghana, the Philippines, Nigeria, Korea, South Africa, Thailand and other nations.

Today, we take a look back at the fabulous photos that Nigerian actresses Stephanie Okereke-Linus, Kaffy, Chidera Odiele and  Osas Ighodaro shared when expecting.

The “bump watch” phenomenon is not just an American thing.

Vanessa Bryant bumped it up in crimson at the 2016 ESPN ESPY Awards held Wednesday, July 13 at the Microsoft Theater in Los Angeles, California.

It was only this week that the couple announced they were expecting after a pretty long lapse. Their current youngest daughter, Gianna, just turned 10 but is about got be de-throned when daughter number 3 arrives later this year. In red carpet interviews, the couple gushed that they are“very excited” about their third child on the way!

As usual, we track your fave celeb moms-to-be so you don’t have to. Want to know what’s new with the expecting ladies in our Bumpwatch and/or what’s up with our alums or their offsprings? Here is a quick round up of a few and links to learn more!

Kristin Cavallari is near her due date (Celebrity Baby Scoop)”

In 2007, I wrote a blog post about the “Bump Watch” phenomenon, generally, discussing it in context of when the tabloids, public and media are wrong. In 2010, I wrote about how Jennifer Aniston is the most bump watched female celebrity even though she’s never been pregnant. At the same time, I was one of the early blogs that speculated in a post as to whether Jennifer Lopez was pregnant given her choice of dress during a concert. (I was right).

I am in that space so I get the fascination. And we here at Bellyitch have a long-standing ongoing “bump watch” tradition of following and covering celebrity preganancies.

I do, also, recognize that people hate the term “bump watch” as well as “bump” and “baby bump.”  It’s cool. No scene.

However, I think writer Rachel Kramer Bussel was going a weeee bit too far in her recent Salon commentary where she called bump watch anti-feminist and suggested we, as a society, should ban bump watch.

Bussel’s piece was a bit rambling and read like a stream of consciousness rant but I understand her thesis:  the incessant watching of and obsession over a woman’s pooch is offensive and reductive of her value to society outside of procreating.

In her post, Bussel bemoans how insulting it is when women are asked if they are pregnant when they may have just had one too many chicken wings the night before.

I can dig it, right.  I support women’s liberation and rights. I am a woman after all and I do and have benefited from all the work that my feminist and womanist sisters have done over the years.

Notwithstanding all of that…. I still think Bussel goes overboard in her rant.

I dunno. Head over to Salon and have a read and let me know your thoughts.

It’s been a little while since we rounded up the latest among the celebrity women we “bump watch” now and in the past. Here’s what is going on with then and links to where you can go to find out more and see more pics!

Jessie James Decker showed off her growing bumping and plenty of cleavage at the 2015 CMT Music Awards. (FashionStyle)

Naya Rivera revealed that she feels awkward having sex with husband Ryan Dorsey. Apparently intimacy isn’t what it used to be for the couple (Celebrity Babies)

Congratulations are in order for Sister Wives stars Kody Brown and Robyn Brown who are expecting their 5th child together,  but Kody’s 18th. (US Weekly)

Kristin Cavallari cradles her growing bump in a bikini on Instagram. (The Hollywood Gossip)

Kim Kardashian has been spotted out and about in simple but still skin tight pencil skirt length dresses and outfits:

A preggers @KimKardashian does not shy away from a little crop top action http://t.co/afnv5Hffcc pic.twitter.com/5MKM7TGLP3

Some celebrity moms use social media to share updates and pics of their belly and bump progression to their fans and followers. Here is a roundup of some recent social shares:

Hilaria Baldwin was chilling poolside with her baby (Instagram)

Tamera Mowry-Housley did “pregnant lady fierce” in a recent outfit she wore on her hit FOX panel talk show, The Real (Instagram)

Eudoxiee Bridges showed off her “one ab refusing to let the bump win.” Funny. (Instagram)

I love it when I notice other regions of the world that also have active movie celebrity culture engage in bump watch. It proves we are not the only ones out here obsessed with the incubation of the next generation of stars.

This time, I spotted Information Nigeria‘s coverage of second time mom-to-be and Nollywood  actress Mary Remmy Njoku at the London premiere of her latest project.

The co-star to the latest film project by noted Nigerian film maker Obi Emolynyre wore a fuchsia halter dress with white beaded adornment in the bodice of the empire waist chiffon dress. Her loose ringlets were a great accompaniment to the formal look.

The movie from Nigerian Thy Will Be Done showed at the on Thursday, February 26, 2015 at the BFI/IMAX theater in Waterloo, London, England.

According to the report Mjoku and her husband Jason Njoku married in 2012 and welcomed their first child together Njoku in July 2013.