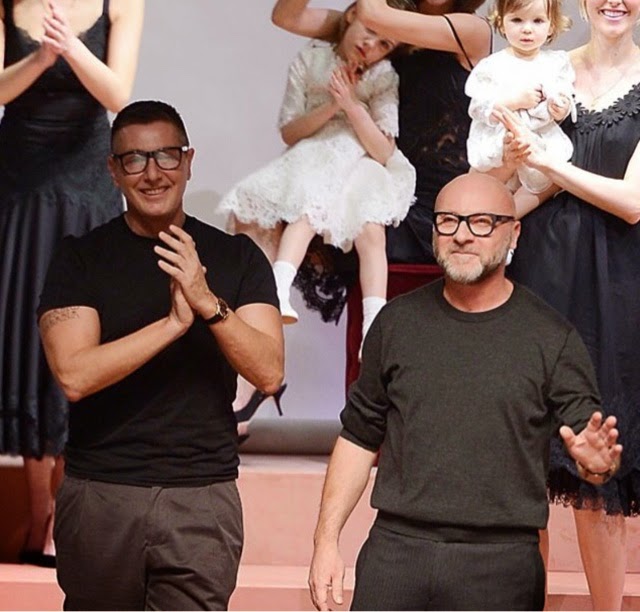 The top designer of high-priced high end clothing then went on, “I call children of chemistry, synthetic children. Rented wombs, semen chosen from a catalog.”
Gabbana was also quoted as saying, “We oppose gay adoptions. The only family is the traditional one.”
Many couples, including same-sex and male -female ones, opt for conceiving a baby via non-traditional methods like intrauterine insemination, in which fertilized embryos are created in a lab from eggs and sperm and then implanted into a woman or surrogacy which requires sperm to be transferred into a woman using a catheter.
It’s a popular option for those who want to have kids with their own DNA.
Dolce &  Gabbana have released statements in response to the backlash. Read it here
Famous heteros who underwent IVF treatment include Céline Dion, Jaime King and Mariah Carey.

E! Online reminds us that Miss World 2014 Rolene Strauss was conceived via IVF to a heterosexual couple, and is a “test tube” baby.
Elton John was the most outspoken celebrity to the remarks. He launched a social media campaign with the hashtag #BoycottDolceGabbana.
“How dare you refer to my beautiful children as ‘synthetic,'” John wrote in an Instagram post on Sunday. “And shame on you for wagging your judgmental little fingers at IVF – a miracle that has allowed legions of loving people, both straight and gay, to fulfill their dream of having children.”
The award-winning veteran performer remarked:
“Your archaic thinking is out of step with the times, just like your fashions,” said the Grammy-winning singer-songwriter. I shall never wear Dolce and Gabbana ever again. #BoycottDolceGabbana”
Other celebs including Sharon Stone and Ricky Martin, who is also gay and has a set of adopted twin children, spoke out in social media in support of John.
John  married his partner David Furnish  in England in December 2014. The two are parents to 4-year old Zachary Jackson Levon Furnish-John and 1-year old Elijah Joseph Daniel Furnish-John, both born to a surrogate mothers.
Following Gabanna’s Instagram reply  saying, “This is the real respect for a different opinion????”.  They’ve gotten supporters too who are using the hashtag #BoycottJohn.
They’ve since released a formal statement in reply (mentioned above) saying it was not their intent to judge the choices of others.
Your thoughts?
By Jeneba Jalloh Ghatt
Celebrity pregnancyDavid FurnishDolce and gabanna anti ivfElton JohnIntrauterine deviceIVFparenting adviceparenting tips
St. Patrick’s Day: How to hide your early pregnancy from friends while out
Get your post-baby body back with Michelle Obama’s #GimmeFive VIDEOS