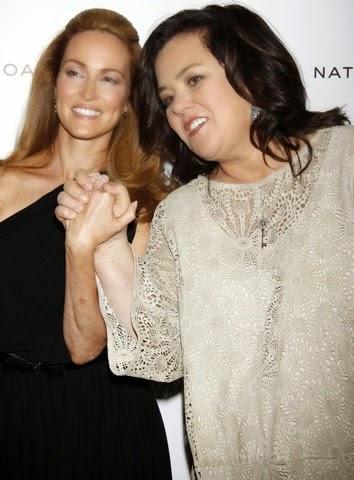 Rosie O’Donnell and her estranged wife since 2012 Michelle Rounds are engaged in an ugly battle over the custody of their 2-year old daughter Dakota.
Rounds says she wants their child to lead a “normal life.”
But O’Donnell’s rep told PEOPLE magazine that Rounds wanted sole custody as a “desperate attempt to use a child for her own gain.”
O’Donnell even threw shade at Rounds and brought their daughter in the mix by Instagraming a photo of Dakota with a message, “Excuse me – do i get a vote?” Not true says Rounds.
“Right now she has 24/7 nannies over there at Rosie’s house,” Rounds told Entertainment Tonight. “I don’t want my child to have a nanny. I want her to be outside playing, I want to be with her. I want to go to all the parent conferences … and that’s just not what it’s about over there.”
Rounds says she is a better parent.
“I’m at my daughter’s every beck and call,” Rounds said. “I give her mild discipline instead of like carte blanche, do whatever you want, which is more or less how Rosie likes to do things.”
She also refuted suggestions that she is after Rosie’s money.
“I made my first million before the age of 39, that was before I met Rosie,” she said. “I don’t need Rosie’s money, I don’t want Rosie’s money. … The prenup money means nothing to me. I will walk away from the prenup if Rosie will give me full custody.”
The View alum has four other kids with former partner Kelli Carpenter.
By Jeneba Jalloh Ghatt
Celebrity pregnancyEntertainment tonightInstragrammingKelli CarpenterMichelle RoundspeopleRosie O'DonnellThe View
VIRAL: After 5 years of infertility, Hubby’s reaction to surprise (VIDEO)
Enter Bellyitch’s Mother’s Day Giveaway (Value $125)