So You Can Think Can Dance host and 2015 Emmy nominee Cat Deeley had a grand ole time this Emmy week taking her bump to all the parties and the big show.

The statuesque Brit beauty and her husband Northern Irish comedian hubby Patrick Kielty are expecting their first child together since marrying in 2012.

Deely, who was up against the winner The Voice host Carson Daly  for Outstanding Host for a Reality or Reality-Competition Programming, stunned in a low cut jeweled and beaded gold gown.

The Friday night before, the former DJ and hubby attended the Emmy Awards’ Performers Nominee Reception at the Montage Beverly Hills hotel on September 19 in Beverly Hills, California.

She wore a tuxedo jacket over a black mini dress concealing her bump. And those shoes were the bomb.com.

The Thursday, she was out again in a black wrap dress with gold embellishments on the shoulder, and carried an Yves Saint Laurent clutch at Entertainment Weekly‘s Pre-Emmy Party at Fig & Olive restaurant on Melrose Place in West Hollywood California.

On  Wednesday, she did black again at the Audi Celebrates Emmys Week 2015 at Cecconi’s Restaurant on September 17, 2015 in Los Angeles, California, wearing a black, grey and gold long sleeve mini dress with a box clutch.

The party started the week before actually, when she attended the 2015 Creative Arts Emmy Awards at Microsoft Theater on September 12, 2015 in Los Angeles, California, in a high slit floor-length black with side embellished dress and sexy strappy heels. 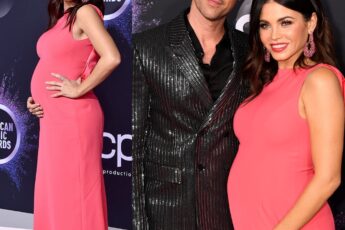