Sunday night at the T-Mobile Arena in Las Vegas, Nevada, the 2016 Billboard Music Awards saw some of our fave Bellytich Bumpwatch alums take the pink carpet in some fabulous fashion creations. And as usual, we poked around to discover who wore what.

However,  the night belonged to Adele who took home 5 awards (second to The Weeknd who won 7). She nabbed the Top Artist, Top Billboard 200 Album for “25“, Top Billboard 200 Artist, Top Female Artist and Top Selling Song for “Hello” Awards.  She wasn’t even there to accept the award in person because she is on a world tour but she did beam in via satellite.

Kunis was in Zuhair Murad couture and Hahn wore an Altuzarra top and skirt. I love loved Bell’s Jonathan Simkhai jumpsuit. So cute!

Ludacris’ co-host was the super svelte Ciara who walked the carpet in a very revealing  Phillip Plein gown. Wowza! She did too more sheer and material dresses during her hosting duties.

Britney Spears performed and before rocked the pink carpet in a black lace showgirl outfit dripping in Jacob & Co jewels and Schutz boots. 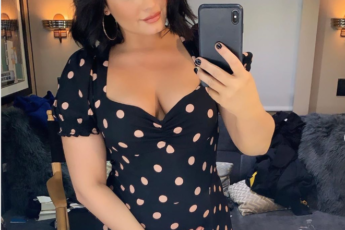