Yesterday was the Daytime Emmy Awards held at the Pasadena Convention Center in Pasadena, California.

Doing our usual red carpet scope out of the moms we have featured before on the blog, we saw the neutral and sheer trend still reigning strong.

Tamera Mowry poses for a portrait at “Portraits by The Artists Project Sponsored by Foster Granton” during the 44th Daytime Emmy Awards on April 30, 2017.

In a surprise shift from her usual conservative dress, Tamera Mowry-Housley showed out in a blush jeweled with pearls Tony Ward ball gown with nude tulle overlay and a sheer peekaboo top. Okay Tamera! We see you stepping out of your comfort zone.

Not suprisingly embracing her curves was her co-host on her FOX syndicated show The Real Adrienne Bailon, who also went with neutral tone in a one shoulder curve-hugging. Love!

Jeanne Mai wore white and she, Loni Love and the entire cast posed backstage for a cast photo as part of the “Portraits by The Artists Project Sponsored by Foster Granton” all looking spectacular!

Their old co-host Tamera Braxton-Herbert, who was let go from the show this season, also looked amazing in a neutral tone ball gown as well. She infamously announced days before the show her plans to join the ladies of the cast had they won.

We didn’t get to see that awkward moment (given how devastated Tamar looked in The Braxton Family values airing of her reaction to getting fired and her unfollowing any friend who guest appeared on the show since).

Aisha Tyler‘s show The Talk won their category.  She was joined by our other Bumpwatch alum, Sara Gilbert on stage.

Oh and Toni Braxton was there looking fab in black!

Her sis Tamar tried to help fluff her dress but ended up revealing a little extra leg and thigh action. Not that Toni is a stranger to the high slit dress.

Tamar’s dress from Steven Khalil‘s store was spectacular on its own.

….nothing but gown. thank you so much @steven_khalil for this beautiful ornate garment. ?✨#Emmys2017 #iCONtips #TamarBraxton #Fashion #Style

We also spotted one of our OG (original) Bumpwatch mom’s Garcelle Beauvais.

By Jeneba Jalloh Ghatt
Given the #WHCD was Light on Celebs This Year, Let’s Look Back At Celebs Who Walked Its Red Carpet Pregnant
Serena Williams Bumped it Up Regally at the 2017 Met Ball 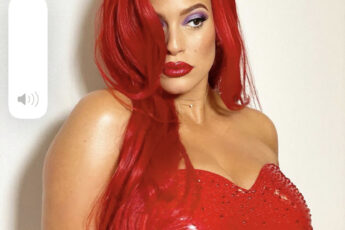