The Bravo TV celebrity was checked into the maternity ward because she had a condition where her cervix was measuring too short and at risk of causing a miscarriage.

She had to get a procedure to cure the defect known as a cervical cerclage, also known as a cervical stitch, a treatment for cervical incompetence or insufficiency, when the cervix starts to shorten and open too early during a pregnancy causing either a late miscarriage or preterm birth.

Javid shared the moment from the hospital maternity triage ward.

“First and foremost, thank you so much for all the messages of love and support along the way,” she captioned a photo of herself laying in bed in a hospital gown.

She continued: “Here’s a little video of me feeling very scared and nervous about something unexpected that my exceptionally awesome doctors found during a check up after xmas where my cervix suddenly measured too short, around 1.3 centimeters, which is high risk for m.c. I got an epidural, an overnight stay at the hospital for a surgery called cervical cerclage, which is considered a rescue.”

She thanked her support team for getting her through the traumatic experience.

“How I got through this emotionally is by the strong, peaceful and beautiful spirit of my father, my maternal strength, and the unrelenting support of my husband,” she continued. “There is so much more to come and although bed rest has not been the ideal way to spend this beautiful time, I am learning a lot, and finding a blessing in EVERYTHING ?♥️? #babyjourney#pregnancyjourney#IVFJourney”

Earlier in the month, she showed her followers her baby bump perhaps to quell some of the rumors that the 46-year old wasn’t really pregnant and had a surrogate but was lying about it.

From vixen to mommy!

It was just last May 22, 2018, a month after her wedding, that a seriously trimmed down Javid was showing off her hot look while attending NYLON magazine’s Annual Young Hollywood Party at Avenue Los Angeles in Hollywood, California. 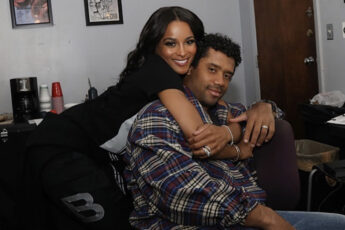