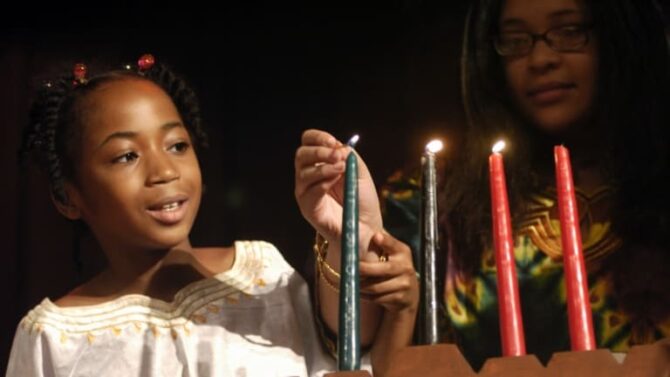 Today is the first day of the pan African and African American holiday developed in 1966 by California State University professor and Chair of Africana Studies Dr. Maulana Karenga.

Kwanzaa means “First Fruits of Harvest” in Swahili, a language spoken in many East African nations. It is a seven-day holiday that celebrates seven values, collectively called the Nguzo Saba, a Swahili word for Seven Principles.

Kwanzaa table setting traditionally includes seven candles, ears of corn, fruit, a cup and a cultural woven mat all symbolizing principles of the new holiday. Celebrants put a green tablecloth over a table they place in a central place in their home, and place a woven straw mat called a Mkeka on top of that table which symbolizes the historical foundation of African ancestry.

On top the mat is a Kinara (a candle holder) with seven candles. It holds three red candles on the left, three green candles on the right, and a black candle in the center. A candle is lit every day, as during Hanukkah. The black candle is lit first, the lighting then going back and forth between red and green, starting with the outermost candles and moving in to the center.

The table also should include Mazao, crops from the community including a bowl of fruit; Muhindi, an ear of corn for each child in the household;  Zawadi, gifts for the children; and Kikombe cha Umoja, a cup to represent family and community.

Celebrants also decorate their home in the pan African colors of red, green and black. They wear traditional clothes worn by Africans in various countries on that continent, including garments made of Kinte cloth, a material made of interwoven cloth strips worn by the Akan peoples of Ghana.

Starting on December 26, celebrants greet each other by saying “Habari Gani” which is a standard Swahili greeting that means “what is the news?”

The response is whatever day it is – Ujima, Nia, etc.

On the sixth day, or New Year’s Eve, those who celebrate this tradition have a reading or discussion, there is held a program that includes welcoming, remembering, reassessment, recommitment and rejoicing, concluding with a farewell statement and a call for greater unity. 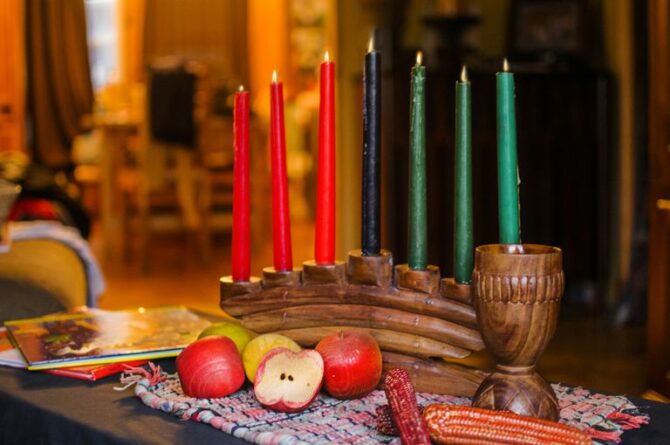 The values are supposed to be building blocks for the African American community and to teach them of the pan-African connection between people of African descent now living all over the world.

Africans of all faiths can and do celebrate Kwanzaa, i.e., Muslims, Christians, Black Hebrews, Jews, Buddhists, Bahai and Hindus as well as those who follow the ancient traditions of Maat, Yoruba, Ashanti, Dogon, etc. Kwanzaa is not supposed to be an alternative to their religion or faith, but a common ground of African culture.

However, some people who reject the Christmas holiday season’s materialism elect to practice Kwanzaa as an alternative to interject meaning into their holiday season.

Those not from African descent can celebrate Kwanzaa, just as others celebrate Cinco de Mayo, Chinese New Year and Native American pow wows.

The political part of the holiday is that it has been credited with helping African Americans stay bonded and for assisting young people to avoid the trappings and failings of vices and other negative issues that sometimes plague African American communities. Learning and practicing this tradition can help young people realize their potential and value beyond the here and now and connect them to their ancestral roots and to others today who share their collective African heritage worldwide

So, for example, rather than “what would Jesus do?” a Kwanzaa-based query might be, “what would your great ancestors who were once kings and queens of the greatest civilizations and cultures do if they saw you acting a fool and disrespecting their legacy and honor?”

Not bad a message at all.

If you are celebrating Kwanzaa with your children this year, enjoy and Happy Kwanza to you! Umoja!