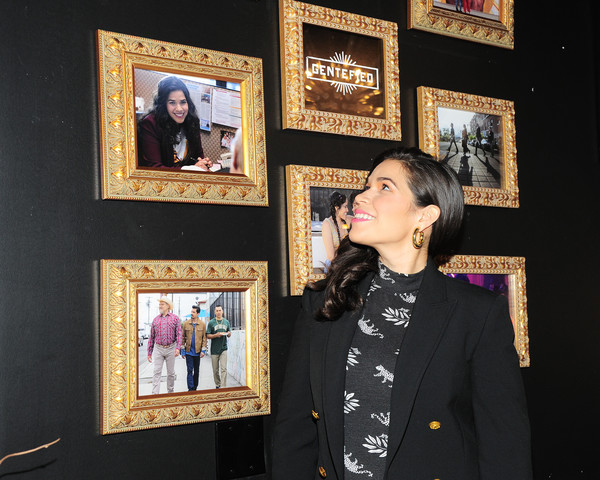 Superstore star  and second-time mom-to-be America Ferrera is still working hard, promoting her projects and looking fierce while doing it.

The Sisterhood of the Traveling Pants star looked glam  in a bump hugging pencil dress, hoops, sharp patent leather heels and a sleek updo while sitting on a panel with co-stars and creators at Netflix in a program produced by the National Association of Latino Independent Producers (NALIP) to promote one of her latest project, Gentefied.
What started as a series of web shorts about a family-owned taco stand that faced relocation due to gentrification has turned to a Netflix series that premieres this upcoming February 21 and starring Ferrera.

Thanks to @netflix for opening their home theater to us, NALIP had the pleasure of hosting an intimate and exclusive screening of the upcoming dramedy @gentefied , to premiere on Netflix on February 21st, 2020! Following the screening was a Q&A panel with ‘Gentefied’ creators and cast, moderated by NALIP’s Executive Director, Ben Lopez. | #Gentefied #WeAreInclusion #Netflix

Just last month, Ferrera was in Utah at the Sundance Festival attending  The Latinx House And Netflix Host Their Joint Kick-off Party on January 24, 2020 in Park City, Utah.

And before that, she and The Black Panther and The Walking Dead’s Danai Gurira were announcing the nominees for the Screen Actors’ Guild awards before getting on stage to present one of the awards during the actual show later.

Good morning fellow thespians ?. Congrats to all the @sagawards nominees. And congrats to anyone who is lucky enough to make a living as an actor. And to those of you dreaming of one day being a working actor- keep hustling, stay positive, learn to validate yourself! It was my honor to announce my guild’s noms with the wonderful and talented @danaigurira #dramakidforlife

The Ugly Betty alum is LA born of Honduran parents. She and husband  Ryan Piers Williams, welcomed their first child, a healthy baby boy back, Sebastian, in March 2018.