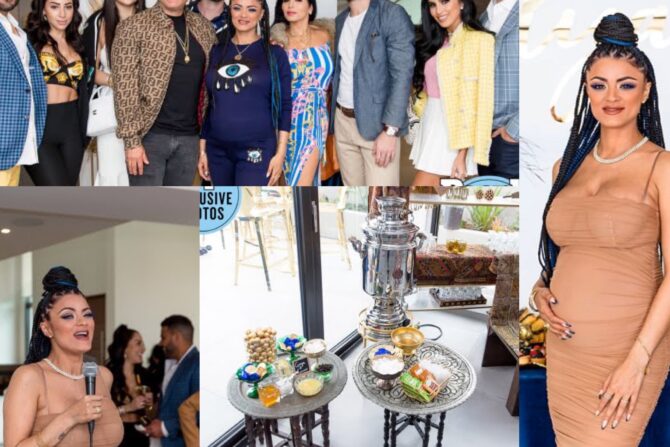 Shahs of Sunset star Gholnesa “GG” Gharachedaghi celebrated the upcoming arrival of her first child at a Moroccan -themed baby shower over the weekend.

She also announced during the event that she is expecting a baby boy. Her friend, event planner Anita Gohari, shared video and photos of the event which featured the name “Elijah” spelled out in gold decorative lettering before a backdrop above the dessert tableand the mom-to-be changed into a blue sweater with big blue eyelashes and announced the baby’s sex as well.

Earlier, she wore a neutral color bump-hugging dress with ruching and paid homage to her son sex and name with blue yarn weaved in her box braids and blue tips on her nails with the letter E on each finger.

She confirmed the gender news on a subsequent Instagram story.

“Hey y’all, we are at my baby shower and I just did a wardrobe change. As you guys can see, true blue — I’m having a boy,” the Shahs of Sunset star said on her Instagram Story, while showing off her blue and white manicure.

“Celebrating @gg_golnesa and sweet baby Elijah at her baby shower!” Farahan captioned a photo with the mom-to-be on Instagram. “Make sure to catch an all new episode of #shahs tonight 9pm @bravotv , it’s ?????? and you’re not going to want to miss a minute of it!”

In October, Gaharachedaghi (who finalized her divorce from Shalom Yeyoushalmi in late 2018) shared that she was expecting her first baby after undergoing IVF using a sperm donor.

Her guests, including current and past cast members like Lilly Ghalichi, vendors and family shared photos in social media

And in exclusive photos in PEOPLE magazine revealed that guests were served food “on two oversized boards, one housing cheeses, charcuterie, vegetables, breads, and other appetizers, while another was flowing with fruits (cantaloupe, strawberries, kiwi, passionfruit, raspberries, dragonfruit, etc.)

They also had salmon, hummus, shrimp, sliders, fries, chicken skewers and lamb chops and got to enjoy a Persian tea (chai) station in honor of Gharachedaghi’s Iranian ancestry.

Hookahs and cocktails like mojitos and micheladas and other alcoholic drinks were available, as well as a variety of flavored waters.

Among her Shahs family attending the event were Mike Shouhed and his girlfriend Paulina Ben-Cohen, Reza Farahan and husband Adam Neely, Destiney Rose, and Shah’s alum Lilly Ghalichi (who attended with her husband, Dara Mir).

The reality star also used the party as a chance to give back, asking guests to bring unopened essentials for babies (diapers, baby wipes, formula, blankets, clothings, bottles, pacifiers, etc.) in lieu of gifts. All items were donated to Baby2Baby, a Los Angeles-based charity that provides children living in poverty, ages 0-12 years, with necessities that every child deserves. “Everyone’s like, ‘The whole point of having a baby shower is to get the free gifts.’ But I told everybody, ‘I do not want gifts,’ ” Gharachedaghi explained to PEOPLE. “I just feel like, I’m not someone who likes to splurge; I can afford the necessities, and don’t want to spoil my son with fancy, fancy things. So why not use this opportunity to help others for people lacking in life?”