A couple of ospreys have settled into minding their new hatch lings which they got through a sort of surrogacy.

The two ospreys named Tom and Audrey live in a Maryland conservancy on Kent Island. The duo were expecting three hatchlings this Spring. Audrey sat on them for over 50 days, long past the incubation period for hatchlings, but nothing happened.

Biologists at the Chesapeake Conservancy who were monitoring and preparing for the eggs to hatch realized that they never would.

To save Audrey and Tom from the disappointment of not becoming parents, the conservancy found a substitute!

An endangered nest in Poplar Island  not far away was discovered to contain two abandoned eggs.  Biologists there rescued the eggs and incubated them along with other eggs until they hatched. After they hatched, scientists took the two chicks to where Audrey and Tom live so they could meet their new mom and dad.

The conservancy says the pair has readily accepted their hatchlings.

Osprey mate for life and return to the Chesapeake each year to nest. These birds are considered an indicator of the overall health of the bay because they eat almost entirely fish and are sensitive to environmental contaminants.

Watch the replacement of the dud eggs with the adopted chicks. 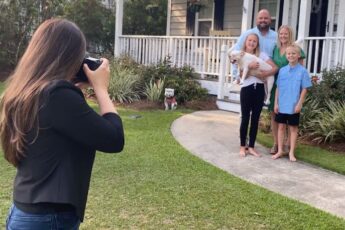