There is drama once again among the Kardashian/Jenner clan. This time, Rob Kardashian‘s sisters decided to plan a shower celebrating his impending fatherhood but did not invite the mother of his child Blac Chyna (real name Angela White).

But he made sure to let everyone know that he did it on purpose and not accident.

“I ain’t hacked either this is rob dog lol.” he later shared, explaining the reasoning in a subsequent tweet. “Didn’t invite the Mother of my child to a baby shower you all were trying to throw for me? You all must have lost your damn minds?”

Blac Chyna‘s friends had already been planning a shower for her but the second shower was a “DILF” theme one to celebrate Rob only. And when Rob couldn’t make it, Chyna offered to go instead, but the sisters were having none of that.

“Rob couldn’t attend, so Chyna was going to attend and Kim [Kardashian] said if Rob didn’t go, then Chyna couldn’t go. It sounds like that’s what caused the argument,” E! reported.This is not the first or last piece of drama to come out of this family. Chyna’s ex-fiance, Tyga,  left her for Rob’s then underaged sister Kylie. Thereafter, the family essentially stopped associating themselves with  Chyna who previously was really tight with Kim and even attended North’s first baby party with her son with Tyga, King, after the couple’s split.

The sisters (and their fans and many others) believed Chyna hooked up with Rob out of retaliation but later recanted, recognizing that Rob was happy and was getting healther after being with her.  The baby and engagement news blindsided them because it was announced on Twitter before the family even knew.

The union of Chyna and Rob really irritated the family as seen in episodes of Keeping Up with the Kardashians and the Chyna and Rob’s tumultuous relationship has been playing out before viewers eyes on their reality TV show Rob & Chyna on E!

These folks are ratings GOLD for this network for sure. 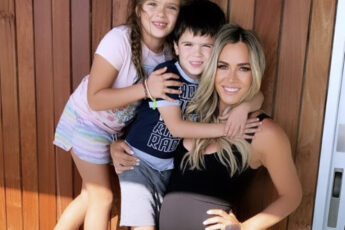