The Atlantic interviewed the Drake University professor who wrote a book about the celebrity baby bump watch craze. In the October 2015 book,  Pregnant with Stars, Watching and Wanting the Celebrity Baby Bump (The Cultural Lives of Law), Renée Ann Cramer, an Associate Professor and Chair of Law, Politics and Society at Drake, examines the American fascination with, and judgment of, celebrity pregnancy.

The piece launches with Cramer’s response to Beyonce‘s twin pregnancy. Cramer gives her perspective that the celebrity bump watch phenomenon is part of a proverbial “pregnancy industrial complex.”  Cramer analyzed Beyonce’s pregnancy with Blue Ivy in her book.

According to the description of Cramer’s  book in Amazon, Kramer “exposes how our seemingly innocent interest in “baby bumps” actually reinforces troubling standards about femininity, race, and class, while increasing the surveillance and regulation of all women in our society.”

Essentially, she blames bump watch articles for promoting unattainable post-baby bodies, something I’ve blogged about often over the past few years. But Cramer goes further. She actually makes a tremendous leap to link bump coverage with government control of women’s bodies, I suppose via social and legal regulations surrounding access to birth control and abortions, and the like.

It seems to me to be a tenuous connection to say “frivolous celebrity gossip” is part of a larger, and perhaps, covert strategy to control survey, commodification of and control women’s bodies.

I think pop culture and society’s obsession with celebrity pregnancy is just part of the admiration and hero-worship of stars, in general.  It’s just among the newest aspect of celebrity life to become enamored with, nothing more. The media cover what the people want to see. And when we see them click more links on bump watch, guess what, we post more.

The people express interest in it and they click articles about baby bumps, and the gossip rags and blogs, including this one, report on what the people want. It’s symbiotic.

In the Atlantic article, Cramer makes racial distinctions in the coverage and suggests that pregnancies of women of color are hypersexualized and less favorable than of white celebrities.

As a person who has covered celebrities and monitored the other sites coverage, I question that  assessment.  The media coverage is the same for the most part, in my opinion.

What is different is how the pubic reacts. It may be different because a lot of members of the general population already view Beyonce and Jennifer Lopez, for example, as sexual people. These women are sexy and their performance on stage and their clothing is revealing and we talk a lot about their bodies as their bodies are part of their image, their craft and their public persona.

Mila Kunis and Jennifer Garner are not known for that.

Also, celebrities of color aren’t given that much mainstream gossip press that is why niche sites like this one, Black Celeb Kids and Latina magazine fill in the void and the coverage of celebrity pregnancy in our sites are usually more positive.

I do agree that societal views of pregnancy are shaped by what people see when they read media articles about celebrity pregnancies, but I am not wholly convinced that there is a connection with control over women’s bodies. Perhaps, I will read the book and see if there is more to the analysis but from the synopsis and the Atlantic interview, I’m not buying it. 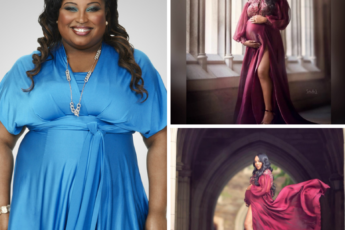