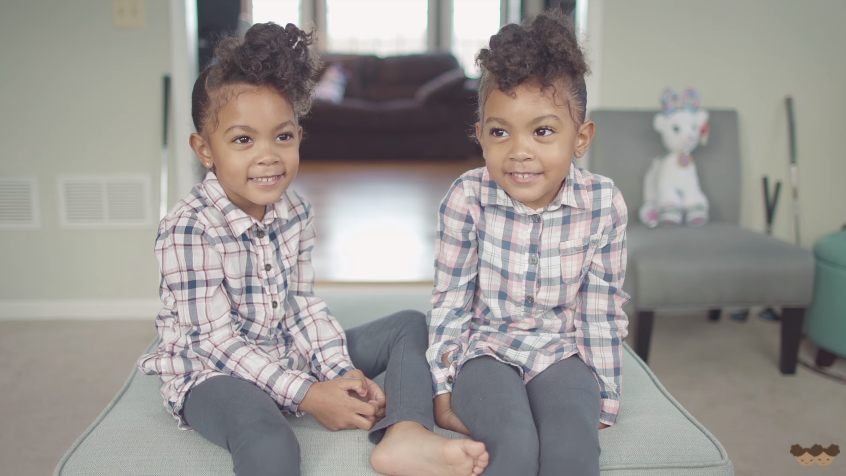 The most famous celebrity twins may not be The Carters‘ (Rumi and Sir), Jennifer Lopez and Marc Anthony’s Max and Emme, Mariah Carey and Nick Cannon’s Moroccan and Monroe, Angelina Jolie and Brad Pitt’s Knox and Vivienne’s, Julia Roberts’ Hazel and Finn or Sarah Jessica Parker and Matthew Broderick’s Tabitha and Marion.

That’s because those sets of twins are kept private by their celebrity parents. They are rarely in the public eye and therefore, not likely recognizable to many, unlike each of their very famous parents!

That is not the case for this set of twins who are growing up in the public eye, in social media and  Youtube.

The 5-year old McClure Twins, Ava and Alexis McClure of East Orange, New Jersey girls have their own YouTube channel with close to 800,000 followers and over 60 Million views and an Instagram account with 1.3 Million followers.

The gorgeous pair’s parents are Nigeria-born Aminat (“Ami” for short) and Spanish-speaking Irish ancestry dad Justin (who also speaks Spanish fluently). Justin is a videographer and photographer and together with Ami, they  produce, edit and manage the twins’ Instagram, Youtube,  Facebook channel which boasts over 336,000 followers and their website.

Dad and Mom McClure also sell boutique dresses the girls have modeled in during New York Fashion Week and have appeared on Good Morning America and other national shows.

Their infant brother Jersey Tayo McClure is barely 2 months old and already has over 32,000 followers on his Instagram! Wow! What an Internet Famous family!

We previously blogged about a 6-year old who earned several million dollars last year reviewing toys. So with this type of success, it is no wonder that over 40 per cent of moms aged 18 to 34 in the United States created social media accounts for their baby before the child’s first birthday.

Another 7 percent made one before the kid’s second birthday. Majority however are battling with the thought in the first place.

Maybe it is a new media thing. Maybe a millennial thing. Whatever it is, it is quite fascinating!