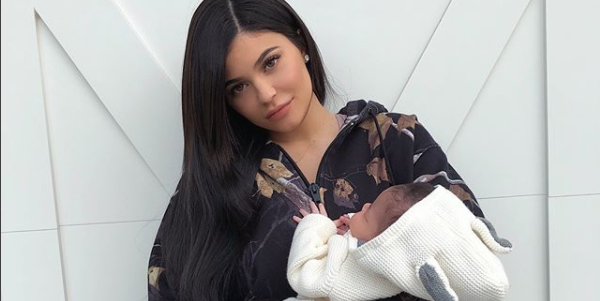 It was a week after make up mogul and  reality TV star Kylie Jenner complained about not using Snapchat much anymore that the social media app’s stock to fell more than 7 percent (a loss of $1.3 billion in market value).  The youngest of the Jenner/Kardashian clan  has redeemed her love for the video sharing platform (and hopefully some stock value) after sharing a sweet video of her gorgeous one month old baby girl, Stormi Webster on Snapchat on Friday, March 2.

The Life of Kylie star’s quick vid was captioned, “my pretty girl” while daddy, rapper Travis Scott, shared his own version of the same photo of baby sucking on a purple pacifier all bundled and snug in an off white furry blanket.

Stormi’s closeup pic debuted a few days after her cousin Chicago West appeared on Snapchat.  No wonder the fans of Kim Kardashian West and Jenner are feuding. These coincidentally-timed reveals give the fans a lot of fodder to play with.  It appears, along with Dream Kardashian, the girl cousins may grow and be close the same way Penelope Disick and North West are buddies.

So fucking lame!!! Kim and I are saying how much it has changed and why the divide. We are sisters, best friends and most of all supporters of each other. Bizarre https://t.co/4PowCoMLsC

Wait @khloekardashian and I really want to know… what is the beef between our fans? How did it start & what do you fight about. We are confused