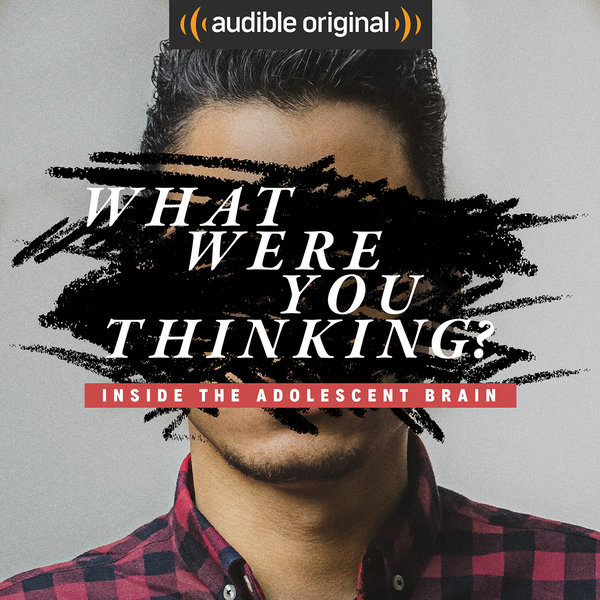 A new Podcast by Audible digs into the mind of teens through interesting, sometimes haunting stories, of adolescents that fell deep in some serious pathology: one joins Isis; another commits suicide; one is a verified video game junkie; there is a criminal hacker and yet another jailed for threatening to shoot up his school.

Their journeys are relayed through the breathy narrative of veteran journalist, NPR correspondent Dina Temple-Raston and it instantly reminds me of the popular “Serial” podcasts. In “What Were You Thinking?, Temple-Raston travels to the teens’ hometown, their prison cells, their neighborhoods, interviewing their family, friends and professionals to bring you the tales of how each wound up in the predicament that had befallen upon them. The narratives are captivating and draw you in.

Each episode includes a hefty segment that examines the science behind the reasons teens would get into these precarious positions in the first place. The purpose, I believe, is to determine if neuroscience, research and data can identify correlations and origins of certain behaviors and reactions. If so, then we parents, society, educators and medical professionals may be in a better position to identify warning signs and ideally be able to help teens avoid them or cut them off at the beginning or root.

Hopefully, these lessons will be empowering so future teens will choose more wisely. I felt like I really could relate and get into the motivation of all American football playing Somali-American who, through a school project, gets sucked into the interwebs and becomes radicalized! Just like that!

The last episode is a 360 return to the origins of the Podcast which started with Temple-Raston exploring her own mindfulness with a colleague of her past. Her experience and what she learned from her discussions with that person evolved into this intriguing podcast series.

Podcasts are the next big thing because they offer entertainment, education, news and information in a very good digestible format. On any given day, I have a podcast on in the background as I work or drive around doing errands or shuttling my children to school and activities.

The success of the hit show “Serial” turned a lot of new fans onto podcasts. These days, it seems everyone and their mom are launching a podcast.

I recently shared a list of top family -friendly podcast to subscribe to and download and I was recently put on to a brand new one that Audible just launched today: “What Were You Thinking?.”

Here is a break down of what you’ll hear in the series:

BAND OF BROTHERS Abdullahi Yusuf went from winning Minnesotan high-school football player to ISIS recruit in less than a year. He opens up publicly for the first time on how his search for identity ended up in radicalization. Plus, leading scientists explore why Abdullahi’s brain may have been hard-wired to make these decisions.

BEING WORTHY Ryan Green explains how the thrill of hacking and being considered “elite” prompted him to hijack 77,000 computers at once. And a look into how the adolescent brain’s hunger for the “feel good” chemical, dopamine, drives young people to push boundaries and take risks.

AFTER RILEY Seemingly happy high-schooler Riley Winters, killed herself at age 15. It was one of many suicides in Colorado Springs that year, a sharp increase that showed no signs of slowing. In this episode, we travel to Riley’s hometown to talk to friends and family, and find that suicide is more complicated than depression.

VIRTUALLY ADDICTED Hear the private thoughts of Felix Graham, a British teen struggling to redefine himself after quitting the internet games he spent countless hours playing. Plus, we travel to South Korea where the government is providing programs and feedback to young people who are over dependent on smartphones and internet gaming. And finally, we hear from neuroscientists about how neuroplasticity may make adolescents susceptible to addiction, but also more likely to be able to rewire.

YOU’RE NOT ALONE Dillon Cossey felt isolated and alone… until he turned to the internet to connect with other victims of bullying which led to him poring over sites about school shootings. Not long after, he was arrested. In this episode, we see how chronic bullying can change the adolescent brain and, along with other significant factors, can lead to violence. Also, we hear from Sue Klebold, mother of one of the Columbine High School shooters.

IT ISN’T SPIRITUALITY, IT’S NEUROSCIENCE We visit programs that help adolescents make better choices, including a Moroccan morchidat center that helps counter Islamist radicalization and a NYC high-school teacher focused on “mindful fitness.” Finally, we go deeper into the science of the adolescent brain and the role white matter plays in its evolution

By Jeneba Jalloh Ghatt
Abdullahi YusufDillon CosseyDina Temple-RastonFelix GrahamRiley WintersRyan GreenWhat Were They Thinking.
Birth Tourism is In the News Again, Not the Chinese but Russians This Time
Study: Expectant Mother are Addicted to Pregnancy Tests