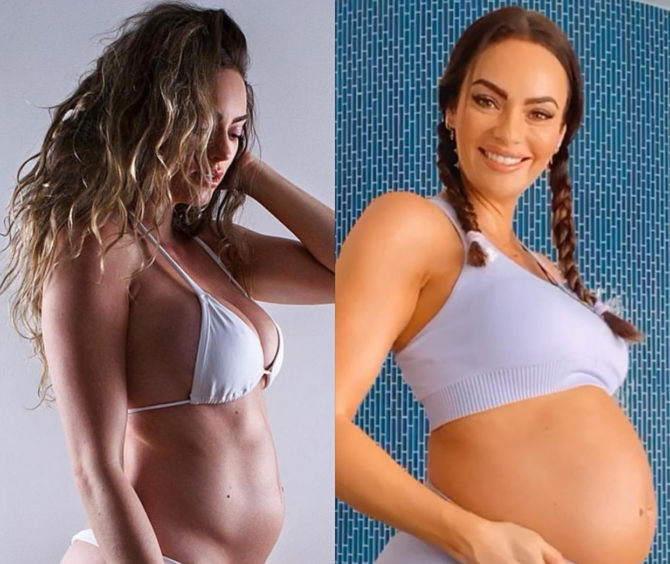 We can always count on an Australian fitness Instagram celebrity to school the masses on diversity in pregnancy experiences and this time, fitness pro Emily Skye shared two side by side shots to show how earlier a baby belly “pops” after a second pregnancy compared to the first.

“Last pregnancy vs this pregnancy – both at 19 weeks along!” she captioned the photo of herself at 19 weeks pregnant for baby #1 and the same gestation for baby #2 with a much larger bump. “EVERY PREGNANCY IS DIFFERENT!!”

Last pregnancy vs this pregnancy – both at 19 weeks along! EVERY PREGNANCY IS DIFFERENT!! Just like our bodies, lives, fitness journeys etc.. we are all different and comparing is pointless unless it’s just for fun or out of curiosity – just don’t let it steal your joy! ? . I don’t feel GREAT when pregnant but all that really matters is that my baby and I are healthy. The size of my belly doesn’t matter (providing I’m healthy of course). ☺️ . I have to say how AMAZING is the female body!! Us women rock don’t we!! ??? . . #pregnantmama #4monthspregnant #19weekspregnant #20weekspregnant #pregnantbelly

Indeed at South Florida Morsani College OB-GYN maternal-fetal medicine specialist Dr. Stephanie Ros told Insider, it’s “totally normal” because the stomach muscles and tissues around them get stretched out during the first pregnancies.

“In future pregnancies, it doesn’t take much pressure to get those tissues to allow the growing uterus to push forward,” Ros said, adding that women may also find their baby bump sinks lower after the first pregnancy since the pelvic muscles are looser too.

Midwife Clare Herbert wrote in The BabyCentre., a second pregnancy (or any pregnancy after the first) may also look bigger sooner because the future child actually is bigger, which is common for second children.

It’s also possible for women to look bigger because they’re actually further along than they think they are, Herbert added, especially if they were still breastfeeding when they became pregnant. That’s because breastfeeding can interrupt the menstrual cycle, making tracking when the pregnancy occurred more prone to error.

The more you know….